The name translates from Korean - "Like the first time." The company claims that the taste gets better if you shake the bottle. The advertising company LOTTE also states that the taste of this soju is softer than that of others, so it is especially popular with women. 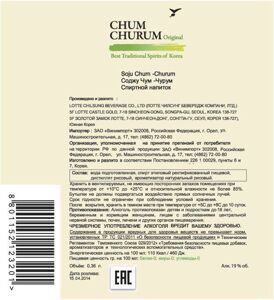 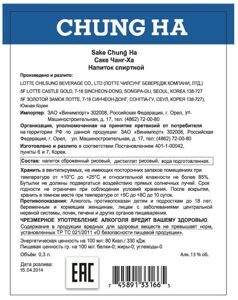 A bit of history and information about the presented drinks:

Soju (cont. 소주, 燒酒) is a traditional Korean alcoholic drink. The volume fraction of alcohol can range from 18% to 45% (the most popular option is 20%). It is made mainly from sweet potatoes or from grain. It is a clear liquid with a characteristic smell of alcohol, sweetish in taste.

In Korea, it is the main alcoholic beverage and elevated to the rank of one of the local attractions. There is a soju museum in South Korea.

Soju appeared for the first time around 1300 during the Mongol invasion of Korea. The Mongols brought with them the technology of distillation, which in turn was adopted from the Persians during the campaigns in Central Asia.

From 1965 to 1991, as a measure to reduce the consumption of rice, the South Korean government banned the traditional method of distilling soju from pure grain. Soju began to do by dilution of ethyl alcohol and the addition of flavors (fructose, etc.). Much of the soju brands currently produced are made in this way. The South Korean state regulates the percentage of soju produced by diluting soju at no more than 35% of the total.

Soju is currently the main alcoholic beverage in both South and North Korea. In South Korea, more than 3 billion bottles of soju were consumed in 2004. The main raw material in the production of soju is sweet potatoes and cereals - rice and wheat. The technological cycle of production of soju includes several stages:

in the first stage, the raw material is ground and pressed;
at the second stage, mash is prepared - ground and pressed raw materials are stored in special vessels, where they gradually accumulate ethyl alcohol;
the third stage is the direct distillation of the mash into the finished product.
Soju is filtered through charcoal made from bamboo of a certain (for an optimal process) grade and age.

Soju is poured into small glass stacks. Meat or fish dishes are the usual snack.
Pouring soju taken with two hands. Pouring a drink to yourself is a bad form.
Drink soju taken in small sips, draining a glass for several times
A glass is never drunk to the bottom - when a little drink remains in the glass, it is filled again.
Younger Koreans do not drink soju before their seniors. Sitting at one table, you should turn away and only then attach to a glass. Other behavior is a sign of disrespect.

The main consumers of Soju and Sake are Oriental, Korean, Chinese and Japanese restaurants.