The beginning of Chilean viticulture dates from the time of the colonization of Chile by the Spaniards in the middle of the 16th century. The first extensive vineyards were founded in the 1500s. missionaries for religious purposes (for sacred wine), the story continues with the arrival of the Spanish conquerors.

At the end of the 17th century, Chilean wines were already competing with European ones. 1870 is the most important time in the Chilean wine history, when wine producers decided to import clones of vines that have immunity against phloxera to France and other European wine regions. The vineyards of Chile are the only ones in the world where phylcoxera did not get, which contributed to the continued growth and expansion of the wine industry. The climate of Chile is so predictable that the harvests here are not too different from each other, and therefore while the vintage is, the years are not as important as in Europe.

Additional inscriptions on the wine label: Reserve and Gran Reserve (Reserve, Gran Reserva) - the terms indicate the aging of the wine in the barrel. 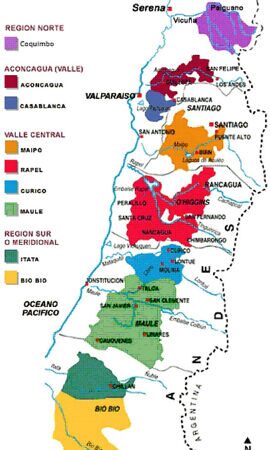 Northern region
The Aconcagua Valley (a region only 3-4 km wide, is considered the northernmost Chilean region, which makes it possible to produce high-quality wines under local, very extreme conditions).
The central valley (the central region is the very heart of the Chilean wine industry, is a huge number of small valleys stretching from east to west with diverse climatic conditions due to the influence of the ocean, mountains and rivers that give names to the appellations).
Meridional (South region).
Kolchagua Valley

Today, the two most prominent appellations that stand out against the background of Chile's entire wine-making variety are the Kolchagua Valley, the Casablanca Valley (Aconcagua region) and the Maipo Valley (Central Region). The success of these regions of wines is related to their location: both vineyards are located near the coast of the Pacific Ocean, which makes it possible to create unique wines.

Winemaking of the Maipo Valley subregion

Maipo Valley is part of the Central Valley region and is closest to the Pacific Ocean, which, of course, creates favorable conditions for production. Maipo Valley is one of the leading appellations of the country, because it was here in the middle of the 19th century. The first vines of noble varieties were planted. Many producers, striving to achieve the highest qualities of their wines, invest huge amounts of money in the development of vineyards and invite French oenologists, who help identify the best natural conditions for growing Cabernet Sauvignon, Merlot and Carmener, the basic varieties of Chilean winemaking.